The judgment in Jam'iat Iscan Al-Ma’almoun is a pillar of the Israeli law of occupation. One would be hard pressed to find a common law rule relating to the occupation which cannot be supported by this judgment. It is essential reading material for any lawyer training in this field and an inexhaustible source for quotes. The judgment is also a microcosm of the Supreme Court’s functioning when it comes to residents of the Occupied Palestinian Territories (OPT).

Barak chooses to ignore the fact that the road’s purpose may be security – a fact which, if true, could have justified the land confiscations – and opts to rule based on the assumption (which he himself doubts) that its purpose is to benefit the population

It is rather fitting that this monumental judgment originated in sin and ended in sin. This landmark judgment, written by then-Justice Aharon Barak, was preceded by another unanimous judgment, written by then-Justice Meir Shamgar (each in turn later served as Chief Justice). I present the facts of the case as they may be read between its lines (indeed, history is written by the victors). The case revolved around an association whose objective was to build housing for teachers north of Jerusalem, near Qalandiya. The association purchased land in the area, prepared plans and submitted applications for building permits to the Israeli military administration. As was the custom then, the plans were submitted for individual houses without a general plan for the entire neighborhood. The applications were approved, the permits were granted, and the association began construction. Then, in Shamgar’s words: “when people in the nearby industrial plant noticed that construction commenced in the vicinity, the matter was brought before the planning authorities”.[1] In other words (and with some allowance for imagination), when people in the Atarot industrial zone noticed the construction, Jewish industrialists contacted the military administration (or perhaps simply made a phone call to Ezer Weizman) and demanded that the Arab construction near them stop immediately. Anyone involved in protecting the environment knows how difficult (if not impossible) it is to fight a building plan once it has already gone through all the planning stages and construction has begun. Not in this case. In this case, the permits were revoked retroactively and the association’s petition to the High Court of Justice (HCJ) was rejected.

In a long, pedantic and tiresome judgment, Shamgar analyzes laws, orders and planning documents from the British Mandate period and the Jordanian period, and reaches the conclusion that the permits had been granted by the Israeli authorities unlawfully and in contravention of planning principles. Indeed, when building an entire neighborhood, one must set forth provisions regarding commerce, parking spaces, auto repair shops, the density of and spaces between buildings, the number of buildings permitted, public buildings, schools, access roads and roads within the area, including public rights to transit and more![2] I find no reference in the judgment to the question whether the neighborhood was indeed being built without regard to these issues – it seems that these issues did not concern the planning authorities which did not examine them either when the permits were granted or when they were revoked. The permits were not revoked because of issues relating to the future residents of the neighborhood, but because of complaints made by Israelis. Yet for Shamgar, this was an excellent reason for finding that the revocation of the permits was lawful. Shamgar puts most of the blame on the petitioners. How can a planning authority imagine that when it approves 24 building permits in one area, in effect, an entire neighborhood had been authorized without a plan for an entire neighborhood having been prepared!? However, it was not only the building permits that were revoked. When the association submitted a full plan for an entire neighborhood, the plan was rejected.[3] The reasons for the rejection were the neighborhood’s vicinity to the Atarot industrial zone (including “the proximity of security plants”) and the plan to build the Jerusalem-Ben Shemen road and a large interchange nearby. This decision also received the HCJ’s seal of approval, this time, with laconic reasoning spanning less than five lines.[4]

The second petition, which bore the more famous judgment, no longer addressed the establishment of the neighborhood, but rather the plan to build the road and the interchange and the confiscation of lands owned by the association for this purpose. The state claimed that the road was primarily designed to benefit residents of the OPT who needed a modern transportation infrastructure to replace the existing one which was designed to accommodate the much smaller traffic volumes of the past. According to the state, the Jerusalem-Ben Shemen road was supposed to serve the villages along its route and link, through the planned interchange, to a modern road connecting Ramallah, Jerusalem and Bethlehem. The state claimed that:

[T]he purpose of this road plan is to serve the needs of the Area. It will allow a rapid link among the communities of Judea and Samaria. It will serve the local populations of Ramallah, Bir Nabala, Al Judeira, An Nabi Samwil, Beit Iksa, Beit Hanina, Biddu, Rafat and Bethlehem.[5]

In addition, the judgment cites the need to serve the tens of thousands of Palestinian laborers who require a transportation infrastructure in order to travel between Israel and the OPT. The court was indeed aware that the state was not disclosing the entire truth. In another case brought before the HCJ at the time, the state claimed that the road infrastructure being built in the OPT was for security purposes – to enable quick movement of forces in case of war.[6] “This approach is baffling” wrote Barak “The military government is one, whether it stands before this court in the aforementioned HCJ 202/81 or whether it stands in the case at bar. How is it possible that what is said to one bench of this court is not said to us? I do wonder”.[7] Despite this, Barak chooses to ignore the fact that purpose of the road may be security – a fact which, if true, could have justified the land confiscations – and opts to rule based on the assumption (which he himself doubts) that its purpose is to benefit the population. How convenient it is to write the judgment when strolling in a fantastical world of a military administration which is responsive to the needs of the population, sensitive to them, longs to fulfill them even if it requires a great deal of effort and fights to defend them all the way to the highest judicial instance – even if it involves sacrificing individual property rights, as often happens in matters of planning and construction.

Route 443 now serves traffic between the Tel Aviv Area, Modi'in-Maccabim-Re'ut and Jerusalem. It is now one of the cornerstones of Israel's de facto annexation of areas north of the Jerusalem Corridor

[…] spans all aspects of public order and safety. Therefore, this authority – alongside security and military matters – applies also to a variety of “civilian” issues such as, the economy, society, education, welfare, hygiene, health, transportation and other such matters to which human life in modern society is connected. As Justice Shiloh remarks in HCJ 202/81 [...]: “What is ensuring public order and safety? The obvious answer is: implementing good governance, encompassing all its agencies practiced in a civilized country in our day and age, including security, health, education, welfare, but also including quality of life and transportation”.[8] 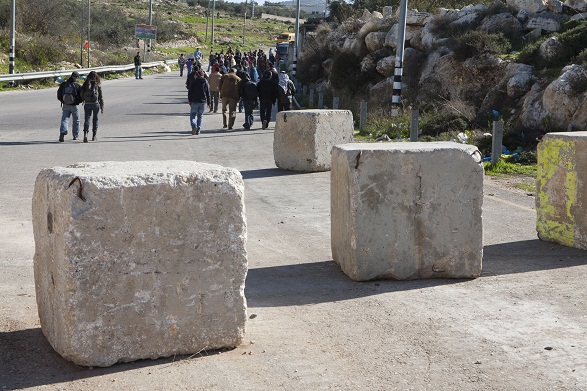 Demonstration against the segregation on Route 443, next to a blocked access road. Photo: Keren Manor, ActiveStills

If these rules were actually implemented on the ground – by the Israeli army and the Israeli court, the OPT would have looked quite different. They would have a modern education system, universities enjoying academic freedom, an autonomous economy which is not dependant on Israel, well-maintained and viable energy and water infrastructures, modern hospitals and flourishing tourism. The separation wall (which is at best aimed at the national security of Israel and not at the security needs of Israeli forces in the OPT), restrictions on family unification with spouses from abroad (which leads to a freezing of life) and other edicts would not have been able to exist. However, in practice, these lofty words serve, time and again, to justify harm to the civilians in the OPT.

In the matter of Jam'iat Iscan Al-Ma’almoun, the welfare of the occupied population and the need to advance the infrastructure which serves it in accordance with contemporary needs was used as an excuse for confiscating private lands designed to solve the teachers’ housing shortage. The road for which the land was confiscated (better known today as Route 443) now serves traffic between the Tel Aviv Metropolitan Area (Gush Dan), Modi'in-Maccabim-Re'ut, built as part of the “seven stars” project (i.e., border towns built along the Green Line), and Jerusalem. It is now one of the cornerstones of Israel’s de facto annexation of areas north of the Jerusalem Corridor. In 2000, movement of Palestinians on this road was prohibited and it became a Jews-only road. At the end of 2009, the HCJ ruled that just as building the road in order to serve the civilian needs of the occupying power (improving traffic systems between the Tel Aviv area and Jerusalem) was prohibited, so the military commander lacks authority to place a blanket ban on Palestinian movement on the road with the result being that the road becomes one that serves these interests and nothing more. The HCJ ruled that the blanket ban on Palestinian movement on the road was unacceptable – yet left an opening for the army to limit the number of points at which Palestinian vehicles could enter the road and impose security checks on them.[9] Even after the stain of apartheid is lifted off Route 443, it will remain an annexation road designed, allegedly, for residents of the West Bank, yet the major traffic on it is “inter-Israeli” traffic between the Tel Aviv area and Jerusalem.


Adv. Yossi Wolfson
The author is a lawyer and an activist for human and other animals' rights. Formerly on staff at HaMoked: Center for the Defence of the Individual.