From the time Israel built the separation wall inside the West Bank, and instituted a draconian regime of entry permits in the enclosed areas – known as the “Seam Zone” – Palestinian farmers separated from their lands by the wall, have been forced to navigate many bureaucratic obstacles to realize their basic right to farm their lands. Despite Israel’s undertaking before the High Court of Justice (HCJ) to preserve as much as possible Palestinians’ connections to land in the Seam Zone, landowners’ ability to realize their right to property has been gradually diminishing, and with it their ability to maintain the agricultural traditions of their families and communities. Additionally, in 2018 there was a dramatic rise in the denial of access permits of Palestinian farmers to their West Bank farmlands lying beyond the separation wall.

In September 2019, the Israeli military published the 6th version of the regulations governing access permits to the Seam Zone (previous versions were called Standing Orders; this document is titled “Procedures and Instructions for the Seam Zone 2019”). As was the case with each successive version of the regulations, the new version contains harsher regulations than the previous version, exacerbating the harm to Palestinian farmers and further restricting their ability to adequately tend their farmlands, and even to simply reach them.

Until publication of the most recent regulations, landowners who succeeded to obtain a farmer permit from the military, could access their lands without limit (albeit only via the specific gate or gates listed in the permit, and subject to their limited opening hours). This is no longer the situation. From now on, farmers will be allowed to enter the Seam Zone only for a restricted number of days per year, to be determined according to the type of crop they grow: olives, almonds, grapes, citrus fruit and so on. This pursuant to a new stipulation in the regulations (Section 5 in Chapter C), which for the first time applies entry quotas to landowners (people with a proprietary tie, in the language of the military). It should be noted that the previous Standing Orders set quotas for “agricultural laborer” (usually, family members who do not have a proven proprietary tie to the lands), but they were not implemented in practice and “laborers” who received a permits could access the farmlands daily all year. The new quotas are already being implemented; landowners growing olive trees have started to receive permits limiting their access to their lands to 40 days – less than a month and a half – a year.

Thus in the case of a Palestinian man from Anin, Jenin district, who owns a plot of land he inherited from his father, where he grows olive and almond trees. For years, the man received “Seam Zone farmer permits”, which enabled him unrestricted access to his land. The man had been left without a permit since late 2018, after the military refused his permit-renewal request. After HaMoked petitioned the court on his behalf – and following the publication of the new regulations – the military issued the man a permit which, for the first time, states: “limited to 40 entries per year” (circled in orange in the photo) (HaMoked file 80193). 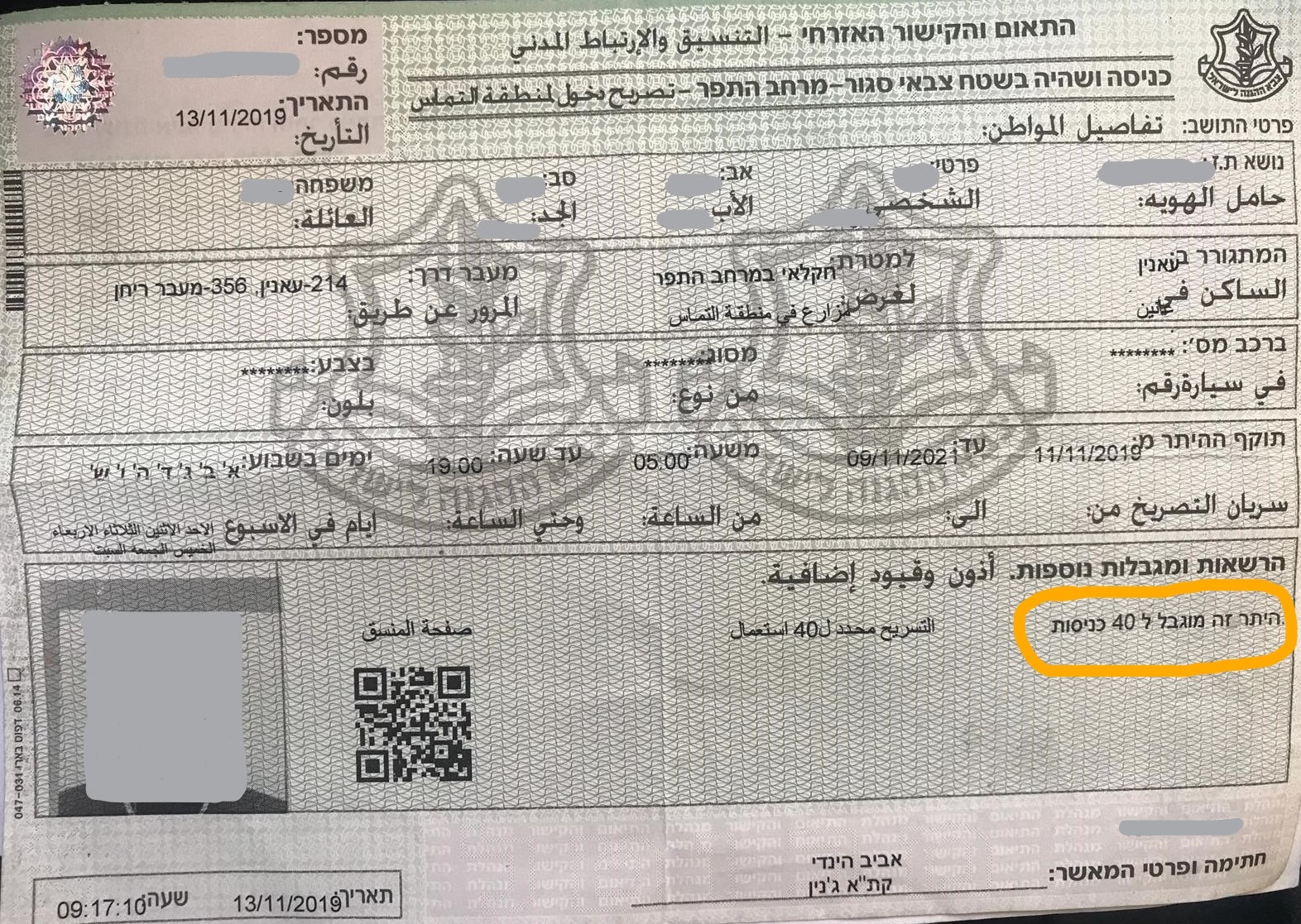 Given that 95% of farmland inside the Seam Zone consists of olive groves – according to military data – these quotas spell the all but complete closure of the agricultural lands in the Seam Zone. It should be noted that the absolute dominance of olives as a crop is a direct result of the difficulty of accessing farmlands trapped beyond the wall, which forced many farmers to abandon water-rich crops which require intensive farming.

The updated Seam Zone regulations (in Section 2) redefine the purpose of an “agricultural permit” – and in fact redefine the entire purpose of the permit regime in relation to the landowners. In the Standing Orders of 2017, an agricultural permit was defined as a permit “issued to a resident of the Judea and Samaria Area who has a proprietary tie to farmlands in the Seam Zone, and the purpose of which is to maintain the tie to these lands” (second emphasis added). However, the definition has now been changed as follows: “Agricultural permit – … the purpose of which is to enable cultivation of the farmland, according to the agricultural need stemming from the size of the land and the type of crop, while maintain the tie to these lands” (emphasis added). This change clearly reflects a policy which denies the basic right of landowners to reach their plots of land, whenever they choose and for whatever reason.

The restriction of the farmers’ access blatantly contradicts Israeli case law and international law, and constitutes an abuse of the power and authority of the military rule in the West Bank and its control over the civilian population there. Over a dozen years ago, Israel promised free access of farmers to their lands, restricted only for security reasons. Now Israel sweepingly restricts access to the land, except for “agricultural needs” in the narrowest sense, as defined by Israel itself. The obvious outcome of this policy is to empty these agricultural lands of Palestinians. It seems Israel strives to make these lands desolate with no Palestinian agriculture, without cultivation, in blatant violation of the farmers’ right to property in their own homeland.

On November 21, in the framework of the proceedings in HaMoked’s petition against the “tiny plot of land” policy (one of twenty such petitions now pending before the courts), HaMoked requested an interim order instructing the state “to refrain from applying the new regulations to landowners in the Seam Zone and their workers … until the petition is decided”. In its request, HaMoked clarified that “the new regulations are even more injurious, and significantly more so, than the previous regulations”, which are the subject of the petition, and that there was no security justification for it.

The state is to submit its response to the request for an interim order by December 1, 2019.
Related Documents