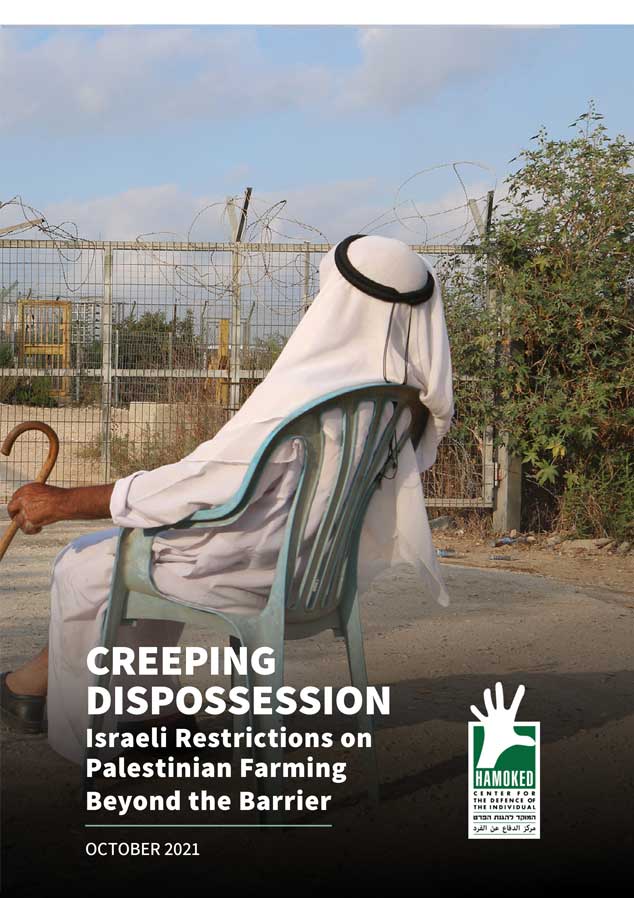 In a new report published today, titled: “Creeping Dispossession: Israeli Restrictions on Palestinian Farming Beyond the Barrier,” HaMoked details the deterioration in Palestinian farmers’ access to their lands trapped in the so-called Seam Zone.

In 2002, against the backdrop of the violence of the second intifada, the Government of Israel decided to erect a physical barrier between the West Bank and the State of Israel. However, most of the Barrier (some 85% of its route) was built deep inside the West Bank rather than on the Green Line, creating dozens of isolated enclaves which constitute some 9.4% of the occupied West Bank. This route cuts off tens of thousands of people from their farmlands and profoundly disrupts daily life for hundreds of communities along the Barrier’s route. Israel declared the areas beyond the Barrier (which it refers to as the “Seam Zone”) a closed military zone that Palestinians are barred from entering without a special permit.

This report focuses on the largest group requiring access to these areas – tens of thousands of Palestinians who own plots of land there, as well as their families, and other agricultural workers. The report shows that Israel categorically fails to uphold its 2011 promise to the High Court of Justice (HCJ) to enable Palestinians with ties to Seam Zone farmlands to continue cultivation of their plots, barring an individual security preclusion. Today, only a minority of the farmers receive permits: in 2020 the military rejected 73% of requests for a farmer permit. A tiny fraction – less than 1% – was rejected over “security” considerations. The vast majority of the permit refusals stems directly from the difficulties imposed by the labyrinth military bureaucracy established to process such request.

As of result of all of the obstacles to accessing these lands, many farmers have abandoned their lands west of the Barrier; and communities that once relied on agriculture as a primary source of income, have been forced to seek alternative sources of income.

HaMoked reiterates its call on Israel to dismantle the segments of the Separation Barrier built inside the West Bank and enable all Palestinians to freely access these areas.